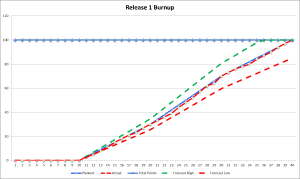 The release burnup chart shows an Agile team’s progress toward their release goal by identifying the work they have completed, or “burnt up.” The release burnup chart builds on the sprint burndown chart, which shows the team’s progress toward their sprint goal by identifying the work that has “burnt down,” Burnup charts can show the effect of scope changes with greater clarity than burndown charts can; they can also be stacked to show changes from one sprint to the next. With these added features comes one precaution: burnup charts are often harder to read than burndown charts. In this post, we will discuss ways of creating burnup charts, how they would be used, and best practices and pitfalls.

What is a Burnup chart?

A burnup chart shows the work completed so far as a measure against the total work. Whereas the burndown shows work remaining, the burnup shows work completed. This feature makes the burnup chart potentially more useful in several ways. First, it allows burnup charts to be stacked to show overall progress across multiple sprints. This is a powerful way to expose how much work is getting shifted from sprint to sprint without getting done (Clarios Technology, 2015).

Burnup charts also have an added line called the scope line, which shows the total project scope. The scope line is useful because any additions to the scope are reflected on the burnup chart, meaning that it’s easier to see the consequences of too many changes to the project. The downside to adding this line is that it makes the chart harder to interpret.

Like the sprint burndown chart, the release burnup chart is effective at quickly detecting incoming problems, provided it is updated regularly. If you are using an automated solution, this is a simple task. Even if you are using a spreadsheet, make sure that updates are made regularly and communicated to the team so everyone can see the progress. Making regular updates allows maximum visibility for the team to see any problems and adjust to them.

Lines representing forecast highs and lows can be used to communicate both the ceiling and floor for the team, or the best possible and worst possible effort based on previous data. If little to no previous data exists, start with what is available and include the forecasts when there is enough data, or use a margin of error percentage. 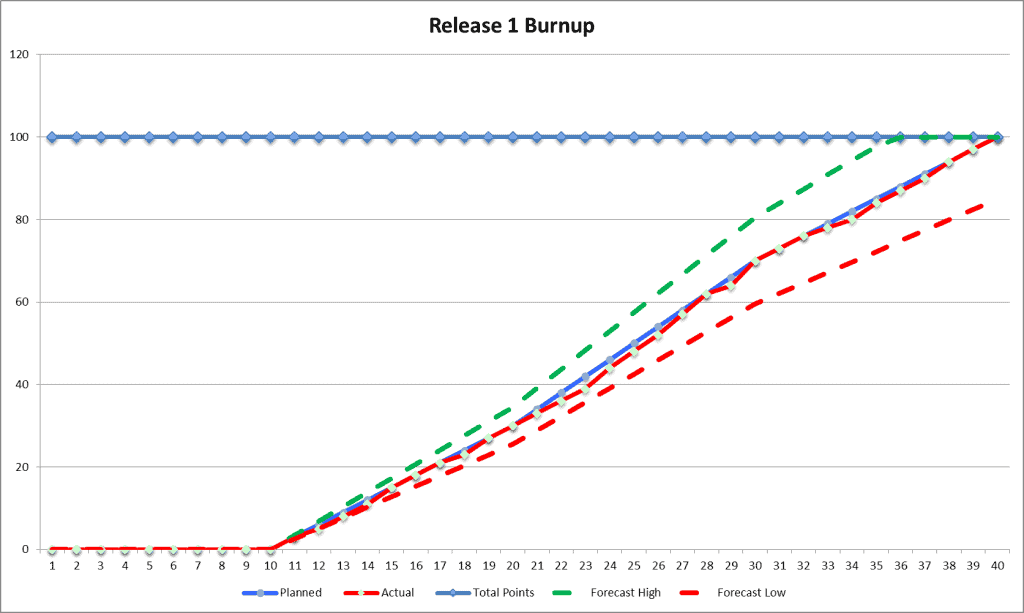 Many different factors can cause a team’s actual output to differ from what is shown in projections. It’s important to let stakeholders know that the chart represents ideal output and to expect differences, especially if the team encounters barriers.

Because the burnup chart is more complex than the burndown chart, it needs some more explanation. If stakeholders don’t understand what the chart means, they won’t be able to use it to make decisions. Therefore, it’s important that everyone on the team knows how to read the chart and detect trouble spots based on the results.

What are your experiences with release burnup charts? Please let us know in the comments.

If you are looking for further assistance, or have a specific roadblock you need to get around, we’re happy to help. Download our Release Burnup Chart Template from our Knowledge Base and talk to us about any Agile challenges you are facing.